Connect the Dots with Roman Numbers 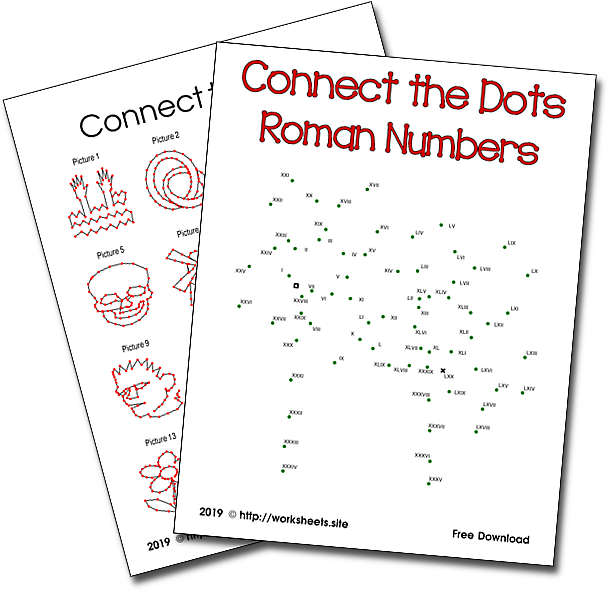 Currently, we continue to use Roman Numbers in different contexts, such as dating centuries or making enumerations in a book or school work. The Roman numerals were invented by the empire of the same name, the Roman Empire, and its value as a number system was so efficient that even today it continues to be used.

The Roman numerals are actually Roman letters, that is, each figure is represented by a letter or a combination of letters, which according to the position where they are found, will add or subtract their value from the total figure.

But to learn how to write Roman numbers it is not enough to use letters at random, you have to know which letters are used, the value of each one and the rules of placement for certain values.

It may seem a bit messy, but every numbering system requires some guidelines that helps its use, for example the number four, is written by subtracting a unit from the number five, and not with the sum of four units. This is a simple rule of the several that has the Roman number system.

To learn the rules of Roman numerals it is best to make use of them in practice, so once you are clear on the rules of these numbers, you can reinforce them by making practical use of them with our games and activities.

Students love drawing and doing puzzles. No matter what time of day it is or what part of the school year it is, they are always so excited when they get the opportunity to do draw and solve a puzzle. Students use their knowledge of numbers to go from one to the next in the twisted number line that is a Dot to dot puzzle. If they do it correctly they'll end up with a clear picture of something fun. For this type of connect the dots puzzles children are not given obvious hints as to what the picture is, preventing them in this way to simply draw the lines guided by their intutions about what the picture is. Instead they do need to rely on their knowledge of the number sequences from 1 to 100. For this activity, they will only need a pencil, but if afterwards they want to color their creation then they'll need coloring pencils too.

The bundle includes connect-the-dots puzzles but using Roman numbers instead or normal numbers. It contains 16 unique pictures or puzzles. The solution of each picture is presented in the first few pages of the booklet. Children are supposed to start drawing on the square mark, and finish their line on the X mark.

These activities combine both a puzzle and hand drawing to practice fine motor skills. The suspense of what the picture will turn out to be, makes this activity engaging and fun. It also helps children spot their mistakes and in that way provides important feedback to them.

Students can check their work by spotting something off with their picture or by checking the answer sheets when they feel they are done with their work.