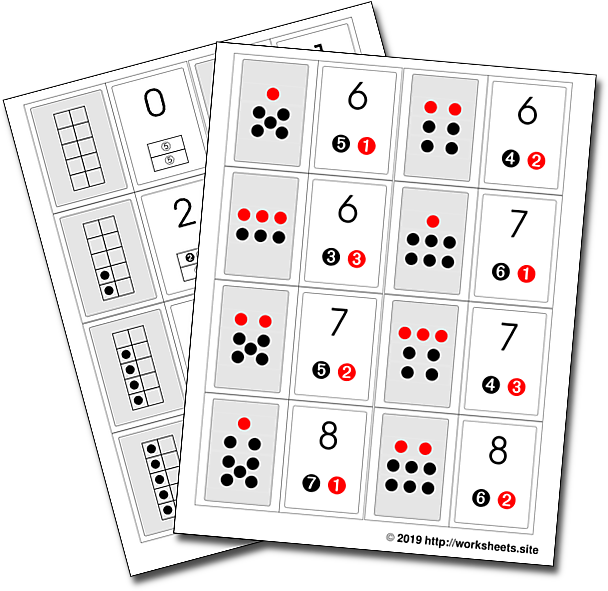 Subitizing is determining with a simple glance the amount of elements shown, without counting them.

When children learn to count, it often takes the form of an act of memorization. To help children understand the number and quantity, this set of dot cards will be useful and can be of aid in explaining a variety of numerical concepts.

When we work with patterns of objects, after a while, we can associate the pattern with the quantity, without needing to count. This is what happens when children, after counting the five points on the face of the dice repeatedly, recognize the figure formed by the four vertices of the square with the point in the middle and already know that it is 5.

Mathematics educators have discovered that the ability to see numbers in patterns is the basis of a strong numerical sense. The ability to visualize and understand numbers supports operational fluency, the ability to add and subtract mentally, and see relationships between numbers and patterns.

Perceptual subitizing is a skill that even young children have: the ability to see perhaps two or three objects and immediately know the number. To transfer this ability, a child needs to be able to "unify" the set and tie it with the name of the number. This ability is often displayed in children who recognize the numbers on a dice, such as "four" or "five." To develop perceptual subitization, students must be given a lot of exposure to visual stimuli, as patterns for three, four and five or ten frames, to recognize them.

Conceptual subitizing is the ability to match and see sets of numbers within larger sets, such as seeing two fours in eight of a domino. It also describes the use of strategies such as counting on or counting down (as in subtraction). Children may only be able to subitize small numbers, but in time, they will be able to apply their understanding to constructing more elaborate patterns.

This file contains 50 subitizing cards, 8 cards per page. Print the sheets on thick paper. Cut each card and fold it in half vertically, then glue the front with the back. Make cards with different point patterns and show them to your students. They can be printed and laminated if you plan to use them constantly. Download it in PDF format