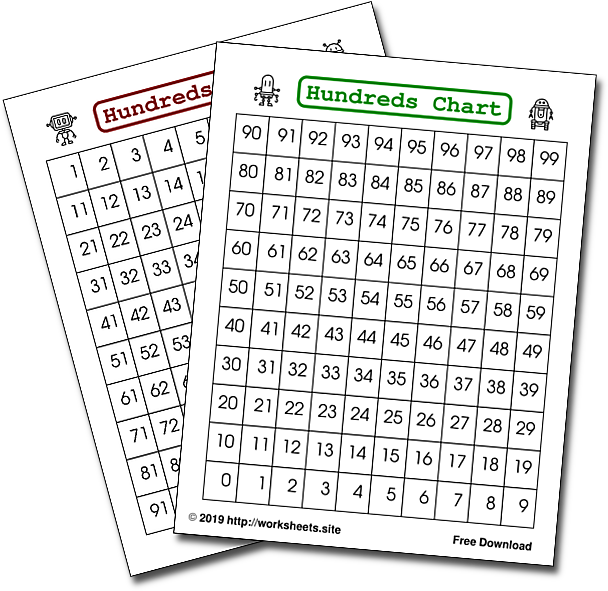 The 100s chart is a grid with 10 horizontal rows of cells and 10 vertical columns. All the natural numbers from 1 to 100 appear in this grid or table.

This chart is one of the essential resources that exist to learn counting in Early Childhood and Primary Education. It helps us introduce students to addition and subtraction, as well as to quickly become familiar with the numbers up to 100. At the same time, students learn the concepts of ones (units) and tens.

With a 100s chart we can explore addition and subtraction of numbers less than 100 with results which are also, obviously, less than 100.

1. Uses of the Hundreds Chart

Why do thermometers go from bottom to top, but hundreds charts from top to bottom?

On the other hand, starting at the top makes sense to the students who are learning to read left to right and top down.

When you add, let's say, 20 to a given number, you can see those hops of 10 are going up the chart, which just conceptually feels better to young kids, that we're going up because the number is getting bigger. And, if we were subtracting, we would be going down that chart.

Students can make better real life analogies like "It's like my carton of chocolate milk. When I drink some there´s less and it goes down. But when I spit it back in there´s more milk and it goes up."

The 1-100 chart is good for early counting, since it starts with a counting number. The 0-99 better visually represents our number system with digits 0-9 in the same row for each 10s. you can find patterns and structure in both of them. There is value in both. Let kids notice/wonder...

The 4 different types of the 1000s chart are also available.