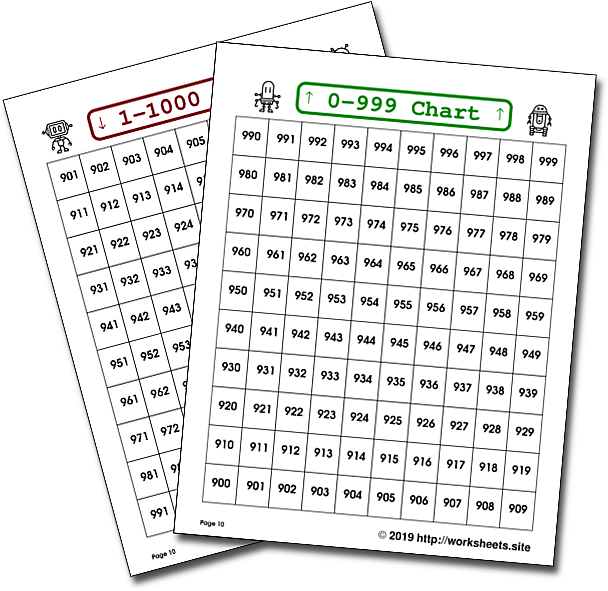 Even after working with the hundreds chart so many kids think 200 comes right after 100. The 1000s chart is a grid containing all the numbers from 1 to 1000, in 10 pages of 10 horizontal rows of cells and 10 vertical columns. All the natural numbers from 1 to 1000 appear in this grid or table.

This chart is one of the essential resources that exist to learn counting in Early Childhood and Primary Education. It helps us introduce students to addition and subtraction, as well as to quickly become familiar with the numbers up to 1000. At the same time, students learn the concepts of ones (units), tens and hundreds.

With a 1000s chart we can explore addition and subtraction of numbers less than 1000 with results which are also, obviously, less than 1000.

If you have a child that is starting to learn their 3 digit numbers than this is for you!

It is standard practice use to use the number line for exploring numbers over 100, but it is not uncommon to see students who don´t know what numbers should go on either side of a number in the number line. Take for example, 324. They don´t know that 324 is in between 320 and 330. Then, even if we give them the anchor numbers, they don´t know if they should count by 1s or 10s to get from 320-330, so they have a hard time placing 324 on the number line. The number line strategy is quite a struggle. We can use hundreds and thousands charts to help.

After using a hundreds chart we can use a 1000´s chart containing all the numbers. It can be printed, glued and spread across the board. We then use a modified 1000s chart on paper with only benchmark numbers on it. This always seems to work as they begin to internalize which hundred or ten the number is closer to.

Following the same ideas of the different types of Hundreds Charts, this file contains all 4 types of 1000s charts, it contains 10 pages for each type of chart for a total of 40 pages. Download it in PDF format