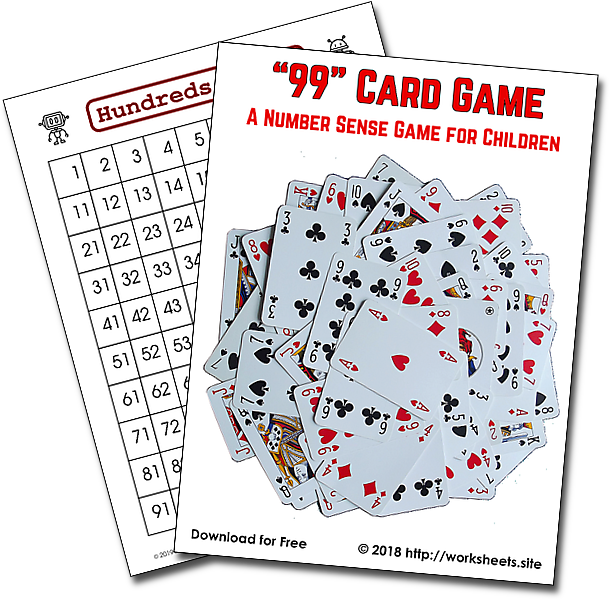 Older kids find this card game's quick pace appealing, while younger kids get a kick out of yelling "Neener, neener!"

Give each player four pennies (or peanuts or whatever) as her bank. Deal three cards to each player. Players can look at their own cards. The rest of the deck goes facedown in the middle of the table as a draw pile.

The card values are as follows:

The object is to stay in the game by adding to the discard pile without letting the total go above ninety-nine and not to lose your ante.

The player to the left of the dealer discards one card faceup and places it next to the draw pile, forming the discard pile, then picks up a card from the draw pile. Each player should always have three cards in her hand.

After each card is played, the player announces the new total.

The next person discards on top of the first person's card and calls out the total of the two cards, i.e. if the first discard was a five and the second a three, the total called out is eight.

Play continues with the total never going beyond ninety-nine. Players use their fours, which reverse the direction of play, their tens, which can add or subtract ten from the total and their nines, which let them pass on their turn, to keep the game going after a king is played or the total otherwise reaches ninety-nine.

If the player forgets to pick a card from the draw pile before the next player has discarded, the group yells "Neener, neener," and that player has to play the rest of the game with just two cards.

When a player cannot discard without going over ninety-nine, she must ante one peanut or penny into the winner's pot, and a new game begins.

Play continues until all but one person has lost all her peanuts. The remaining player wins the pot.

During each round of the game, the running total will eventually climb to 99, and once it has, it is not likely to decrease very much before someone is unable to play. The game's strategy, therefore, revolves around cultivating a hand that can survive for as long as possible once ninety-nine is reached. This consists of saving 10s, 4s, 9s, and kings while playing cards of large value. Another strategy is to raise the total to 99 early by use of the required card (usually a 9 or King depending on house rules) in the hopes of catching another player unprepared.

Decomposing numbers can be a useful strategy when learning math facts, to help gain a deeper understanding of a number, or to add. It is essential to know the decomposition of numbers well in order to successfully deal with addition and subtraction. The decomposition must be done mentally and the children have to be aware that the same number can be broken down in several ways.

Playing games is one of the best ways to increase the amount of time they are practicing a skill. Playing decomposing games in small groups, pairs or independently is very important. Students often do some of their best work when given the most amount of time to practice.

Due to the simple strategy and focus on basic addition, the game is ideal for culturing math skills in children. This is also true because the new total must be called out on each play, lending enjoyment to more expressive children and assertiveness practice to others.

It is helpful to have a hundreds chart to record which number the players have reached. It also helps students add on and recognize patterns (such as 10 more is the number below the last number, and 9 more is like 10 more less 1). When students discover these patterns themselves, they remember them better than if we tell them!

Here is an extended discussion of the game Oh No! 99! and its application in the classroom.

This file contains the Hundreds Chart to play the 99 Card Game, in PDF