Shut the Box Print and Play 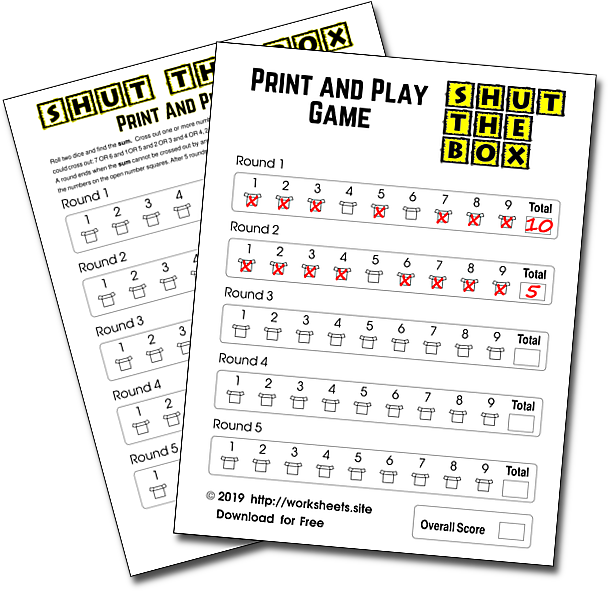 Shut the Box is a fun kids math game, addition game and strategy game at the same time. "Shut The Box" is an old classic board game that can be played with as many people as you would like. The best part is that you can play it by your self. Kind of like the card game "Solitare".

Begin by giving each player a printable "Shut the Box" playing sheet. Players will use their pencils to cross out the pictured boxes.

Each player rolls one die to determine who goes first. The highest number does. If a tie, roll until the tie is broken.

Each player in turn rolls 2 dice. Players want to cross out their 1 to 9 boxes by making them add to the sum of what was rolled.

The first player takes a die or pair of dice and rolls them. The player then chooses which boxes to shut so that the sum of the boxes equals the sum of what was rolled. You keep rolling until you roll a number whose sum you can't match with the tiles.


The player must use numbers that add up to the number he rolled.

He then rolls the dice again, aiming to shut more numbers, and continues throwing the dice and shutting numbers until reaching a point at which, given the results produced by the dice, he cannot shut any more numbers.

At that point, he then receives penalty points for each number that is uncovered.

When he can't cover numbers, the next player goes.

Once the 7, 8 and 9 boxes have been shut, you can choose to roll just one die.

The winner is the player with the fewest penalty points after five rounds.

A good strategy is to leave open as many possibilities as possible for future rolls. You do this by closing as few numbers as possible on each roll. Closing 5 is better than closing 2 and 3 because if you roll a 2 or a 3, the 5 won't help you, but the 2 and 3 together can serve any purpose the 5 could serve.

Decomposing numbers can be a useful strategy when learning math facts, to help gain a deeper understanding of a number, or to add. It is essential to know the decomposition of numbers well in order to successfully deal with addition and subtraction. The decomposition must be done mentally and the children have to be aware that the same number can be broken down in several ways.

Playing games is one of the best ways to increase the amount of time they are practicing a skill. Playing decomposing games in small groups, pairs or independently is very important. Students often do some of their best work when given the most amount of time to practice.

This file contains personal printable sheets to play the Shut the Box game, in PDF