The Printable Game of the Goose 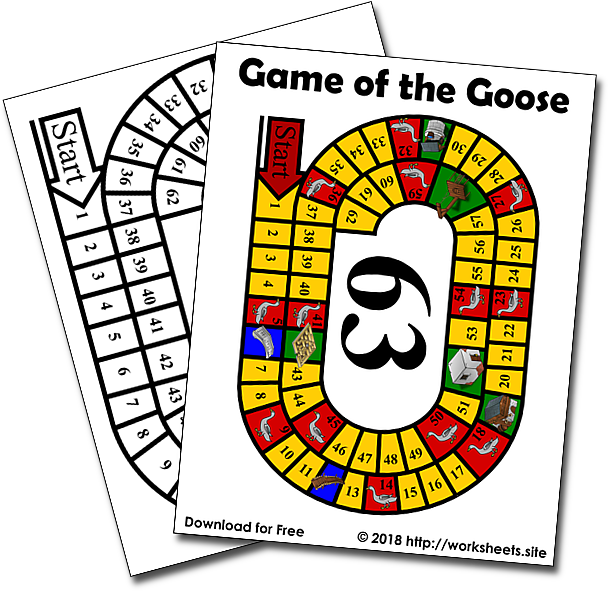 Download and print the Game of the Goose. If you don't want to go through the hassle of finding and buying the board and and you have a color printer, simply download this 2-page PDF and print it. You'll get a neat mini game in an instant.

1. How to play the Game of the Goose
2. Adult variation
3. Children's variation

1. How to play the Game of the Goose

Description by Dagonell the Juggler

The game was invented for Francesco de Medici, who gave it to Phillip II of Spain. Any number of players may participate, however more than six tends to be impractical. It is strictly a game of chance and children can compete on an equal basis with adults.

The board is a spiral race course with both reward and penalty squares. Players advance by rolling dice and moving their marker that number of spaces. First player to arrive at the center, square sixty-three (63), by exact count wins. If the final dice roll is too high, the player must move his piece forward to the last square and then backwards until the full count is reached.

Only one player may occupy any space on the board. If you end your turn on a square occupied by an opponent, that player goes back to the square you started your turn from.

Squares five (5), nine (9), fourteen (14), eighteen (18), twenty-three (23), twenty-seven (27), thirty-two (32), thirty-six (36), forty-one (41), forty-five (45), fifty (50), fifty-four (54) and fifty-nine (59) have a goose on them. If you land on one of these squares, you again move the number of spaces on your die roll, in the direction you are currently moving. The sole exception to this rule is a nine on the opening move which would send the player straight to the finish. On an initial roll of six and three, the player advances to square twenty-six (26). On an initial roll of four and five, the player advances to square fifty-three (53). The squares have no special significance at any other time. A roll of nine at any other time in the game is played normally.

There are several other squares with additional features.

With a little advance preparation, Goose can also be made into a "live" game for children. You will need: a roll of duct tape to lay out the pathway; a pair of large dice made with 1/2 gallon milk cartons, a sharp knife, tape, contact paper and a magic marker; an empty tankard; a sand bucket; toy manacles made of paper cuffs and paper clip chains; and sixty-four sheets of typing paper. On ten sheets of paper, draw the following: a start sign; a bridge; two dice showing three and six; two dice showing four and five; a tavern sign; a well; a maze; a prisoner's ball and shackle; a skull and cross bones; and an end sign. On twelve sheets of paper, draw a goose. Forty-two sheets are left blank or may be drawn decoratively. On a bare floor, lay out the game squares as shown in the illustration. Place the tankard on The Tavern, the bucket on The Well, and the manacles on The Prison. The children take turns rolling the dice and advancing along the path as if they were the pieces on the board. Play the game as normally. Whenever a player lands on a square with a prop, they must hold that prop for as long as they occupy that square. A referee will be required to keep track of whose turn it is and retrieve dice that have rolled out of reach.