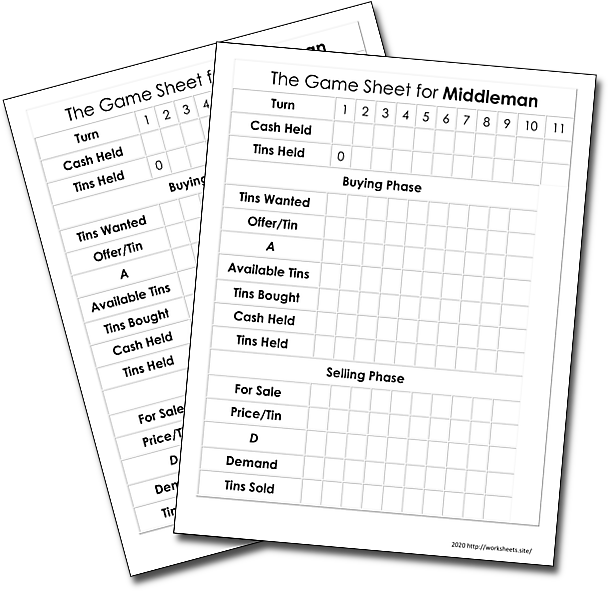 A paper and pencil game where players take the part of traders dealing in tins of tuna. Each starts with a fixed sum of money and then buys and sells tins of the product with the object of ending the game with more money than his or her competitors.

There are a lot of games which simulate market demand and supply, but this is the only one I know of that achieves this in a way that will satisfy paper & pencil purists. Middleman's designer Eric Solomon wrote in "Games With Pencil And Paper".

Since dice are not acceptable in true pencil-and-paper games the market figures are decided by adding together numbers privately chosen by the players at the start of the game.

An interesting feature of this is that a certain amount of prediction is possible on the basis of the order of the numbers (the digits 0 to 9 can be used once each) you have selected and those revealed so far by your opponents. This opens the way for skillful players to recognise which rounds provide buyer's markets and which provide seller's markets, and trade accordingly.

Players take the part of traders dealing in tins of some worthy commodity, say tuna. Each starts with a fixed sum of money and then buys and sells tins of the product with the object of ending the game with more money than his or her competitors.

Each player needs one, plus a sheet of paper marked up as a Game Sheet

are made of ordinary lined paper with rows and columns labeled as in the picture above. Use the password worksheets.site to open the file.

Starting capital for each player is ten times the number of participants. This figure is written into the first Cash Held box in the first column of each player's Game Sheet.

Each player writes the numbers 0 to 9 into the boxes on the row marked A in any desired order.

Next, players write 0 to 9 in a different order into the boxes on the row marked D.

All the players first visit an auction to buy tins. Each player privately writes the number of tins desired into the Tins Wanted box of the column of their Game Sheet corresponding to the current turn.

Next, players write the amount of money they are prepared to pay per in the Offer/Tin box. These two numbers constitute each player's order.

After players have written their order, the auctioneer - who is not one of the player but purely conceptual - reveals how many tins are for sale. Players call out their A for the turn, and the total gives the number of tins available on the market.

Because our notional auctioneer wants to maximise profit, players are served according to their willingness to pay the highest price. If the player who offered the most has his or her order satisfied and there are still tins available, the player who bid the next highest offer price has his or her order dealt with. This procedure continues until all orders are met or there are no tins left to be sold.

Players write the number of tins they succeeded acquiring in the Tins Bought box of the Game Sheet.

Three players - Jane, Fred, and Mary - fill in their Game Sheets as shown above. Jane has offered the most per tin, Fred is the next and Mary has tried to get her tins too cheap with the result that she gets none at all.

When two or more players make identical offers per tin, and no other player with a higher offer is still waiting for his or her order to be met, the tie is resolved by satisfying their orders equally until one of the following situations occurs:

Here are two more examples showing what happens when there are players offering the same amount for tins:

One tin remains unsold because it cannot be shared equally between Fred and Mary adn there is no other buyer remaining.

When all players have filled in their Tins Bought boxes they proceed to fill the Cash Held and Tins Held above the Selling Phase of the Game Sheets. In the Cash Held box players write a sum equal to the cash in hand minus the money he has just spent in acquiring new tins (the number of tins bought multiplied by the offer price per tin).

Players who err in placing orders by not having the funds to pay for their tins are out of the game.

Everyone privately decides how many tins to put on the market and the asking price per tin. These numbers are written in the For Sale and the Price/Tin boxes.

The market never pays more than 10 per tin.

The D numbers are then added together to the give the numbers tins that the market demands This is written in every player's Demand box.

When two or more players ask the same price for their tins, and no other player with a lower asking price still has unsold tins, the tie is resolved by allowing them to sell tins equally until one of the following situations occurs:

The remaining tin demanded by the market Jane and Fred have sold five tins each cannot be provided equally by both Jane and Fred, so Mary is allowed to provide it.

The market demand has been satisfied, leaving Mary with 18 unsold tins.

The winner is the person with the most money in the Cash Held box at the head of column 11. The number of tins still held does not enter the reckoning.