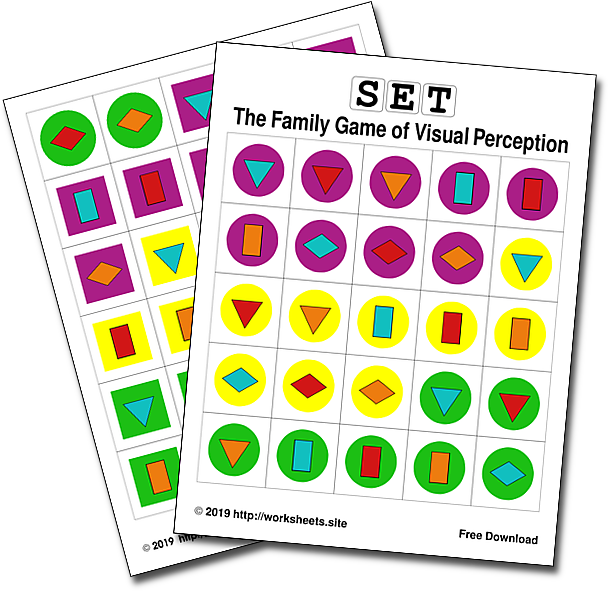 Set is a real-time card game designed by Marsha Falco in 1974. The game evolved out of a coding system that the designer used in her job as a geneticist.

The deck consists of 81 unique cards that vary in four features across three possibilities. Each possible combination of features appears as a card precisely once in the deck. All players compete simultaneously and try to claim sets of cards in a single pass through the deck.

2. Features of the Set Cards

The object of the game is to identify a 'Set' of three cards from 12 cards laid out on the table. Each card has a variation of the following four features:

For example, the following are 'Sets':

All three cards are red; all are circles; all have triangles; and all have different inner colors.

5. The following are not Sets

All are circles; all circles are yellow; all have different inner shapes; however, two inner shapes are red and the other one is orange.

For a quick introduction for anyone playing the card version, and especially for children under six, start with the small deck (just the solid circles). This eliminates one feature, outer shape. Play as indicated below but only lay out nine cards. When you can quickly see a 'Set' with this 27 card mini version, shuffle the two decks together.

The dealer shuffles the cards and lays twelve cards (in a rectangle) face up on the table so that they can be seen by all players. The players remove a 'Set' of three cards as they are seen. Each 'Set' is checked by the other players. If correct, the 'Set' is kept by the player and the dealer replaces the three cards with three from the deck. Players do not take turns but pick up 'Sets' as soon as they see them. A player must call 'Set' before picking up the cards. After a player has called 'Set', no other player can pick up cards until the first player is finished. If a player calls 'Set' and does not have one, the player loses one point. The three cards are returned to the table.

If all players agree that there is no 'Set' in the twelve cards showing, three more cards (making a total of fifteen) are laid face up. These cards are not replaced when the next 'Set' is picked up, reducing the number to twelve again. If solitaire is being played, the player loses at this point.

The play continues until the deck is depleted. At the end of the play there may be six or nine cards which do not form a 'Set'.

The number of 'Sets' held by each player are then counted, one point is given for each and added to their score. The deal then passes to the person on the dealer's left and the play resumes with the deck being reshuffled.

When all players have dealt, the game ends; the highest score wins.

The file contains 81 Printable Cards for the Set Game, these are different from the commercial version of the game and more compact. Print them and cut them. You could also laminate them for a longer life. Download the PDF