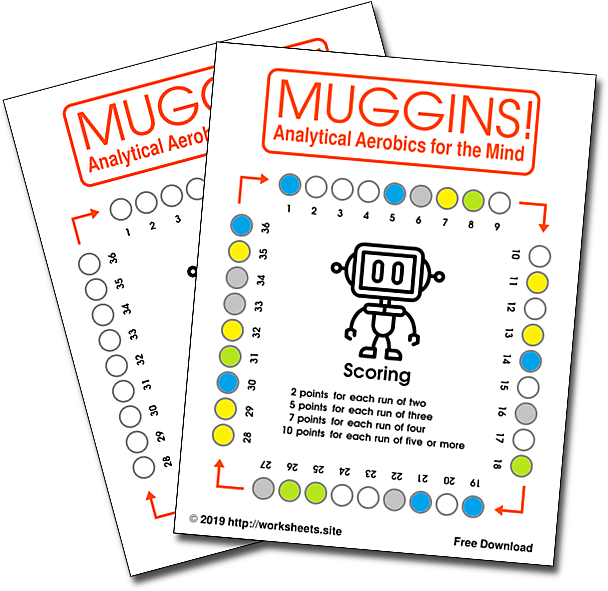 Add, subtract, multiply, and/or divide three six- or twelve-sided dice together in any combination. Select the answer that builds your marbles into a run OR blocks your opponent´s run. Throw in a bluff or challenge your opponent's answer as you try to outwit and outmaneuver each other in this analytical aerobic workout for the mind!

Here is a video reviewing and explaining Muggins!

3. Rules of the game

Each player selects a marble color. (20 marbles per player.) Each player must first roll all three dice and add the numbers shown to get a total. The player with the highest total becomes Player #1.

Player #1 begins the game by rolling all three dice. Then, selecting any two of the numbers rolled on the dice, Player #1 must add, subtract, multiply, or divide the two numbers together to produce a subtotal. To that subtotal the player must add, subtract, multiply, or divide the third die to produce the total. This total will be the answer placed on the board. The player must use all three dice in a turn but only once each. The choice of operations (adding, subtracting, multiplying, dividing) and the order in which these operations are used on each turn. The answer selected must be an open spot on the board. The strategy is to select the answer that helps build a player's run of 2 to 5 marbles in a row for bonus points or to block an opponent's run. (See Scoring)

For Example: Player #1 (blue marble color) rolls a 1, 3, and 6. Some of the possible combinations are:

Notice that each number was used only one time. Player #1 could place a marble in the open 3 spot to build onto an existing run of two blue marbles for five bonus points at the end of the game, or Player #1 might choose to take the open 8 spot to block the yellow's run of four in a row. Either option is a good strategic move.

Bluffing is legal in MUGGINS! if you can get away with it. When a player places a marble on the board, no explanation is given on how the number was produced. Each player is responsible for making sure all moves are correct, i.e. that no one tries to bluff their way onto the board. If a player challenges a move, then the player in question must explain the answer. If no correct solution is given, then the challenger removes the illegal marble from the board plus on additional marble of the bluffer. If a correct solution is given, then the challenged player is allowed to remove one of the challenger's marbles from the board. A challenge must be announced before the dice are touched by another player.

Any player rolling triples (Example: 4, 4, 4) must remove one marble of their choice from each opponent. The player must then use the same roll to make a total as in any other turn and place a marble in that answer. It is good strategy to consider the possible answers that can be made with a throw of triples when considering which marble to take from the board from each opponent. Keep in mind that only one marble may be placed in turn.

If a player has no possible move on a turn, then that player must declare "no move" and pass the dice to the next player. If an opponent sees a possible answer that the player overlooked, then "Muggins!" can be declared as soon as "no move" is announced. The opponent then explains the answer and places a marble of their own color in that spot. The opponent is still allowed a turn in the regular rotation.

The game ends when one of the following occurs;

Scoring takes place after the game is complete. Each player begins by counting the number of marbles on the board for the individual players. Score 1 point for each space occupied by your marble. Next, bonus points are added to the above score as follows:

An even simpler version would be using the three six-sided dice with only addition and subtraction and playing on only the 1 - 18 portion of the board.

Requires 3 regular dice and printable board

This print and play game comes in a PDF

. It contains the board game sheets. You can laminate it and use disks or wooden cubes to play or instead you could just print it and let the kids play by coloring the circles with crayons or coloring pencils. After they are done with a game use a new sheet.