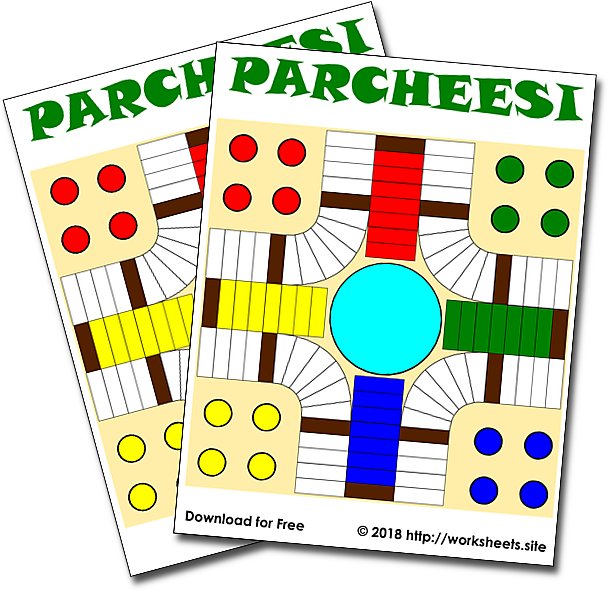 Download and print the Parcheesi boardgame. If you don't want to go through the hassle of finding and buying the board and and you have a color printer, simply download this 2-page PDF and print it. You'll get a neat mini game in an instant.

four players sit one at each end of the cross. They play in two partnerships, partners sitting opposite each other. All pieces start in the central square. Each player throws the dice. The score is the number of mouths facing upwards, except that none signifies 25, and one signifies 10. The player scoring the highest goes first. Throwing: a player starts by throwing the dice. If the score is 6, 10 or 25, the dice are thrown again, noting all the throws and continuing until 2, 3, 4 or 5 is thrown. A player may refuse to throw and pass the turn if it would be advantageous to the partnership.

pieces are then moved according to the scores thrown; the throws can be taken in any order. Having thrown, a player may refuse to move if it would be to the partnership's disadvantage. Throws may be combined to move the same piece, or divided among two or more pieces. A single throw cannot be split, though, e.g. a 4 cannot be used to move two pieces two squares each. Pieces may “double up”, sharing a square with other pieces of the same or the partner's colour. Such doubled up pieces may then move together as one. The path for the pieces is: from the centre, down the central row of the player's arm of the cross, anti-clockwise around the edges of the board, and back up the central row of the player's arm of the cross back to the central square. A piece may make a second circuit if it would be advantageous to the partnership. Pieces must enter the central square by an exact throw, at which point they are borne off the board. A player's first piece may start out from the central square on any throw, after which, only 6, 10 or 25 allows a piece to set out.

a piece landing upon an enemy sends the enemy back to the central square to begin its journey afresh. If the enemy is doubled, then only a double may capture it. If the enemy is on a cross-cut square it is safe from capture, and the square is out of bounds to the allied partners. A player capturing a piece is entitled to another turn.

the game is won by the partnership who first gets their pieces home.