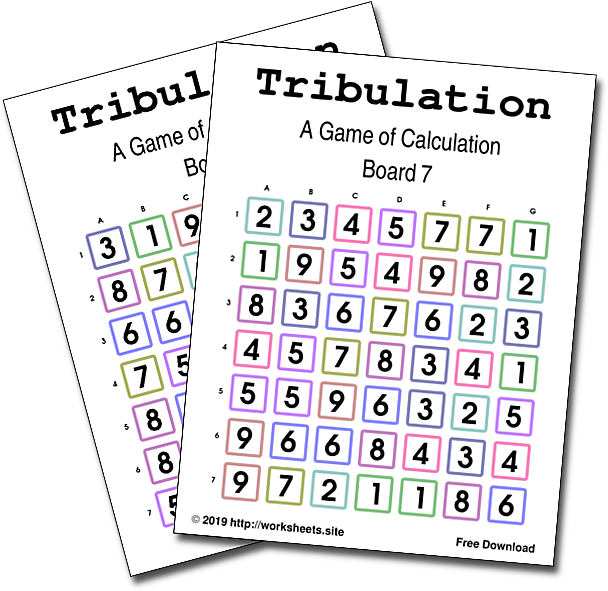 Tribulation is a simple game of calculation, designed to practice times-tables as well as addition and subtraction. It is aimed at young children, but can be enjoyable for the competitive geeks as well. Here is a video reviewing and explaining Tribulation.

Tribulation is a challenging and addictive game particularly if you have kids who still have to learn their times-tables!

Designate the starting player. At the start of each round, one of the blue disks is revealed simultaneously to all players. Everyone now tries to be the first to find in the grid of 49 numbers, three adjacent ones with which one can form the announced number.

Two of the three numbers are multiplied together, the third of them is subtracted or added. The three numbers may lie horizontally, vertically or diagonally next to one another, but not forming and L. See figure.

The order of the numbers does not matter. You can also multiply the 1st and 3rd numbers and add or subtract the middle number. The only condition is that all 3 digits are side by side in the manner described above. For every number, there are so many possible combinations.

Game is played until all the 50 numbers are used up. The winner is the player who has found the most numbers at the end.

This game is about speed but not only about speed. Although it is vital to be able to simply 'see' whether a particular combination of digits gives a specific result, to be successful one also has to remember partial results and where they occur. Otherwise one will search areas of the board where it is very unlikely to find a fitting combination of digits. In the same direction, once one has found that no combination of 6 and 7 (to give an example) exists whilst looking for 39 (= 6x7-3), when 46 comes up, it is no longer necessary to look for 6x7+4. Thus the game has a strong memory aspect.

Neither speed nor memory will win you a game against an experienced opponent unless you are able to absolutely concentrate for the duration of the game. This opens up the area of 'trash-talk' (if your opponents allow it) and of course mistakes (deliberate and otherwise). The game itself has no rule punishing announcing combinations which do not give the desired result, but it might need one. After all, the opponents need time to check whether your announced combination is true or not, and you could use that time to look for real solutions.

The basic game can be varied according to the preferences of the players. For example one may introduce brackets (allowing the formation of e.g. 6x(7+1)=48) or require four-number combinations (6x7 + 2x3 = 48).

Also, one can introduce a crude handicap system for uneven players. At the very basic level, one can force the better player to play looking at the grid from the wrong side. Increasing the handicap can be achieved by requiring the better player to find more than one combination yielding the target (beware that some targets might become impossible to achieve twice!). Alternatively, the better player may only use a 6 by 6 subgrid, or may not use a particular digit (say '5') at all.

This print and play game comes in a PDF

. It contains 10 Board game sheets with pre-shuffled numbers for easy setup. It contains answer keys for each of the boards. Each board is guaranteed to have all possible disk. The answer sheet needed only horizontal and vertical arragements but the players may find diagonal solutions first. You can cut and use the disks on the last page of the PDF or player can instead mark off the numbers from 1 to 50 in the tables of shuffled numbers.