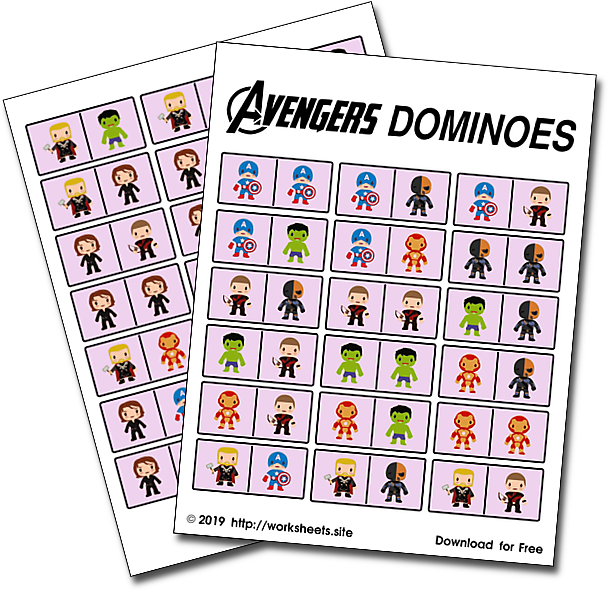 This free PDF has print-and-play Avengers Dominoes for kids of all ages. Playing with Avengers Dominoes can be fun. The domino tiles include the following Marvel Characters: The Hulk, Capitan America, Thor, Black Widow, Iron Man, AntMan, Hawkeye.

These are the traditional rules of dominoes:

How to play dominoes?

Put the tiles face down on the table and mix them.

Each player takes 6 to 10 dominoes; for a game with more than 3 players, each player should take 6 dominoes.

The remaining dominoes are left on the table (these are the "dormant" dominoes). Do not let the other players see your tiles.

The youngest player starts (or you can go in alphabetical order).

The first player places one of his dominoes on the table visible side up.

The second player tries to place a domino on the table that matches one of the sides of what is already there. If a player can not do it, the player takes a domino tile from the stack and skips that turn.

The string of dominoes played starts to form, and can look a lot like a snake.

The players continue in turn to put dominoes on the table (or take one from the pile of unused dominoes, if you can not put one) until someone wins.

The winner is the first child who manages to get rid of all their dominoes. But if no one can do it, then the person with the least amount of dominoes is the winner.